More than 39 million people around the world are blind. But for about 10% of these individuals, Braille – a reading and writing system that utilizes a series of raised dots that represent letters, numbers and punctuation – is a valuable tool. Braille is something lacking in most school systems, and is difficult to learn as we grow older when the majority of blindness occurs. So could this new wearable glove be the solution to teaching Braille to the larger vision –impaired population?

Researchers from the Georgia Institute of Technology have developed a wearable computer glove that can teach braille, even when the user’s attention is on another activity. The research team – including Thad Starner, a professor at Georgia Tech and a technical/lead manager on Google’s Project Glass – first created a technology-enhanced glove back in 2008, called Piano Touch. The glove could teach individuals how to play piano melodies in 45 minutes.

Their latest creation is an improvement on Piano Touch, which has been built around a process called passive haptic learning (PHL) – the idea that people can learn a skill unconsciously without devoting full attention to what they are learning.

For their study, participants were required to wear the gloves during a series of tasks. The gloves consist of small vibrating motors that are stitched into the knuckles. 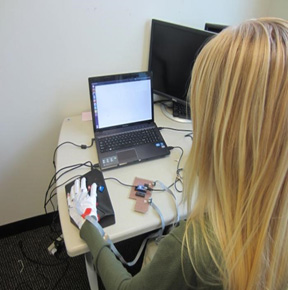 In the first task, the motors in the glove vibrated in a sequence that mimicked a typing pattern of a premeditated phrase in Braille. The participants were given audio cues that let them know what Braille letters were produced through typing the sequence.

Each participant was then required to type the phrase once on a keyboard without any vibrations or audio cues while the researchers measured their accuracy.

In the next task, participants played a computer game for 30 minutes – as a distraction – while wearing the glove. Half of the participants were presented with repeated vibrations and audio cues that represented the same Braille phrase as the previous task, while the remaining participants acted as a control group and were only given audio cues.

The subjects had no previous knowledge of Braille and the tasks did not include visual feedback, meaning participants were unaware of their accuracy. On comparing the participants’ results with those of the first task, the team found that those in the control group had about the same level of accuracy.

However, those who had repeated vibrations and audio cues in the second task were 30% more accurate, with some even gaining 100% accuracy. Furthermore, the researchers found that these participants were then able to effectively go from writing Braille to reading it.

“After the typing test, passive learners were able to read and recognize more than 70% of the phrase’s letters,” says study co-author Caitlyn Seim, a student at Georgia Tech.

Seim is now in the process of conducting another study, which involves using the glove to teach the full Braille alphabet to participants. She says that so far, 75% of subjects have demonstrated perfect typing accuracy. In addition, participants were able to recognize and read more than 90% of Braille letters after 4 hours of learning.