Specifically, the findings reveal that eye patterns center on a stranger’s face if the viewer regards that person as a potential romantic love partner, whereas the viewer focuses more on the other person’s body when the feeling is one of sexual desire. Though this may seem like an obvious progression, researchers say that automatic judgment can happen as quickly as half a second, producing contrasting gaze patterns.

The research team, from the University of Chicago, has published their results in the journal Psychological Science.

For this study, researchers had male and female university students view a series of black-and-white photos of strangers. The participants examined photos of young, adult heterosexual couples who were interacting with each other. Then, in another part of the study, the participants looked at photos of attractive people of the opposite sex who were looking directly at the camera.

For both parts of the study, the participants sat in front of a computer and were asked to decide as quickly as possible whether the people in the photos drew out feelings of sexual desire or romantic love.

The time it took for the subjects to identify romantic love versus sexual desire did not differ significantly, which the researchers say shows that the brain can quickly process both emotions.

However, after analyzing the eye-tracking data, the researchers found that people tended to fixate their eyes on the face when the image evoked a feeling of romantic love, whereas when the images elicited sexual desire, the viewers’ eyes moved from the face to focus on the rest of the body.

And this result was the same for both male and female participants.

So, if you are wondering what someone’s thoughts are about you upon first meeting you…check out their eye movement!

What if computer screens corrected to your specific vision? It may happen sooner than you think!

The researchers at University California -Berkley are developing computer algorithms that compensate for an individual’s visual impairment, creating vision-correcting displays that enable users to see text and images clearly without wearing eyeglasses or contact lenses. This technology could potentially help hundreds of millions of people who currently need corrective lenses to use their smart phones, tablets and computers. One group who would benefit greatly, for example, are those afflicted with presbyopia, a type of farsightedness in which the ability to focus on nearby objects is gradually diminished as the aging eyes’ lenses lose elasticity. You all know who I am talking about…. The people with the Walgreen’s reading glasses that they need to read a text, a phone number, an email, etc. 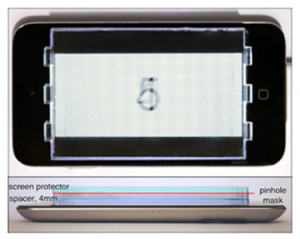 “We now live in a world where displays are ubiquitous, and being able to interact with displays is taken for granted,” said Barsky, who is leading this project. “People with higher order aberrations often have irregularities in the shape of the cornea, and this irregular shape makes it very difficult to have a contact lens that will fit. In some cases, this can be a barrier to holding certain jobs because many workers need to look at a screen as part of their work. This research could transform their lives, and I am passionate about that potential.”

Huang, now a software engineer at Microsoft Corp. in Seattle, noted that the research prototype could easily be developed into a thin screen protector, and that continued improvements in eye-tracking technology would make it easier for the displays to adapt to the position of the user’s head position.

“In the future, we also hope to extend this application to multi-way correction on a shared display, so users with different visual problems can view the same screen and see a sharp image,” said Huang.

As more and more applications are being found for IPAD’s and Smart Phones are becoming much more common place, this is indeed a timely advancement.

There was a lot of news lately about the softball sized eyeball that washed up on a Florida beach recently.

The speculation was that it could be from a giant squid, or even a whale.

Alas, it appears it was probably from a large swordfish.  “‘Experts on site and remotely have viewed and analyzed the eye, and based on its color, size and structure, along with the presence of bone around it, we believe the eye came from a swordfish,’ said Joan Herrera, curator of collections at the FWC’s Fish and Wildlife Research Institute in St. Petersburg.”   Also there were straight-line cuts visible around the eye pointing to a fisherman cutting the eye out and then discarding it.

That’s a pretty big swordfish! Although, I think a giant squid would have been even cooler