A revolutionary new computer game being developed by an British team of neuroscientists and game designers could improve the sight of visually impaired children.

Academics from the University of Lincoln, UK, are working with WESC, one of the UK’s most respected specialist schools for visually impaired children, to create and evaluate a new ‘visual search rehabilitation game’.

Currently there are around 25,000 children in Britain (about two children per 1,000) with a visual impairment of such severity they require specialist education support. There are a myriad of causes of blindness in children, but cerebral visual impairment (damage to areas of the brain associated with vision, rather than damage to the eye itself) is one of the most the most common.

Researchers from Lincoln’s School of Psychology and School of Computer Science will work with staff and children from WESC – the specialist centre for visual impairment. The school and college, based in Exeter, have been providing education and care for young people with visual impairment since 1838 and is a designated High Performing Specialist School.

Jointly funded by a grant worth around £130,000 ($194,102.35 USD) for a Knowledge Transfer Partnership (KTP) the two groups will apply the very latest research in visual neuroscience to the rehabilitation of childhood cerebral visual impairment and special education.

There is existing research that shows that visual search training can lead to significant recovery of sight following damage to visual centers of the brain in adults. The issue has been that the existing training programs are just too boring to use with children.

The new game, designed specifically for children, will be a fun computer based tool which will benefit children with visual field loss – holes in their vision due to damage to the brain’s visual pathways.

The game will use the same principles derived from the existing programs in use with adults suffering from visual field loss.  The basic premise is that patients have to search for hard-to-find objects on a computer screen (a ‘visual search’ task), but the game will be modified to make the task more stimulating and fun for children and structured to maximize the efficiency of learning.

It is expected the new game will be suitable for rehabilitation of adults who have suffered sight loss due to stroke.

Some of the more common questions I hear are  “Doctor, how do I keep my child’s eyes from getting more near-sighted?” or  “are video games hurting my child’s eyes?”

The truth is, there have been many theories over the years about what causes near-sightedness (technically known as Myopia) to progress.  Certainly genetics play a big role, but what about environmental factors?

In  China, where as many as 90% of urban youth are myopic, it is truly considered an epidemic and many studies are being conducted about what causes myopia and how to stop its  progression. The current research seems to disprove the common belief that  “near work” (reading or computer use) leads to increases in myopia.  Surprisingly, myopia appears to be correlated to how much time the children spend outdoors!  In other words, the more time outside in natural sunlight, the less myopia progression.  The activity outside doesn’t seem to matter, it can be playing or it can be reading, just get outdoors!  Perhaps the sun is the best remedy for myopia.   And it is much more difficult to play a video game outdoors…just saying. 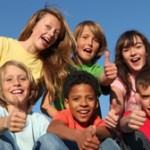 Click here to learn more about the myopia epidemic in China